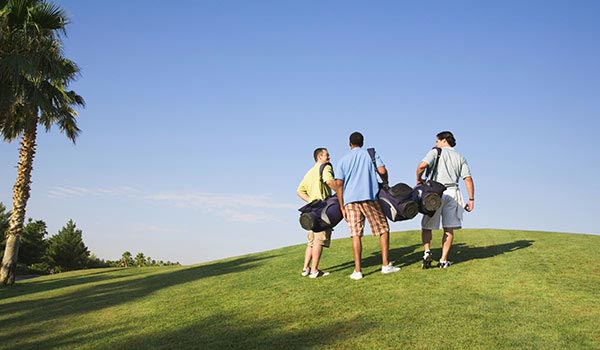 Golf Tournament Formats - Which is Best for You?

Golf tournaments traditionally have an element of friendly competition, which is why they are becoming more widespread for their business networking and charity potential. Golf tournaments are taking the business world by storm, but it’s important to remember that for any business function, your chief objective is to make sure your guests have fun and enjoy themselves. You may have heard choosing a venue is crucial in the planning process for a golf tournament, however, choosing the appropriate format is not far behind.

The majority of professional and competitive golf tournaments often fall under the stroke play format, which involves counting the total number of strokes taken on each hole and totalling them up at the end of the round. The winner would be the player who completed the round (or rounds) in the lowest number of strokes. Stroke play is great for events that are catering to strong golfers or players who are looking for a serious round of golf, however, the key for charity or networking events is to create a fun and engaging game that all players can enjoy.

When deciding your format, you must first take into account the quality of players you expect to have at your event and choose a format that will be enjoyed by all. Here are some of the most common tournament formats:

The scramble is by far the most popular tournament format for charity fundraisers and corporate events. In a scramble, participants play in teams of two or more – each player hits a tee shot on each hole and selects the best shot. All players now play from that spot and continue this until the hole is completed. This format is a great choice because it relieves the pressure of individual scores and allows everyone to play and socialize while keeping a good pace to the round.

The rules of a scramble are very informal, and can easily be modified by the tournament organizers. If you plan to make changes, however, be sure to make them clear to all participants. Making the rules clear will keep the game fun and easy to follow for all participants.

Best ball (often confused with the scramble) is actually one of the easiest formats to follow. Teams of two or more all play their own ball on each hole as they would traditionally. The catch here is that only one player's score counts for the team. The lowest number of strokes on each hole is recorded for the team. Again, this can be modified by the tournament organizer if they wish. Often, organizers will specify that each player must record a score twice during the round, which prevents teams from using the same player’s score on every hole.

Alternate shot is rarely used for charity or networking events, however, it’s another fairly simple format. Participants play in teams of two and alternate shots throughout the day. Player 1 hits a tee shot, Player 2 hits the next shot. This is repeated until the ball is in the cup. However, players must alternate tee shots -- If Player 1 tees off on the first hole, Player 2 must tee off on the second.

Unless you’re hosting an event for the local gym members, chances are speed golf wouldn’t be a good option for your event. Nonetheless, speed golf has been gaining traction as a format lately. Forget carts and caddies, speed golf takes the leisurely stroll we are so used to and turns it into a race. Players sprint between shots and holes with the final score being the sum of strokes and time.

As mentioned, you must consider the group of players you will be entertaining for the day. Most fundraisers and networking events seem to run better under the scramble format, as it allows for a fun day of golf with little emphasis on individual performance. It’s important to have a format and some rules in place, however, try and keep them to a minimum and let your golfers have fun.