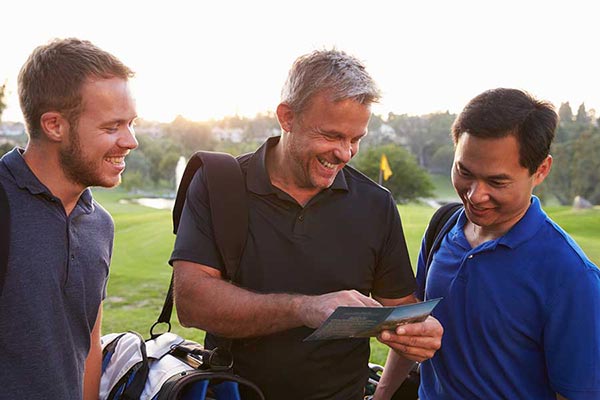 How To Handicap Your Charity Golf Event

We’re all familiar with the standard scramble where players all tee off, then one player’s shot (usually the best) is chosen. The team all plays their second shot from that location. Play continues like this until one player holes out.

These scrambles are lots of fun but are often won by the higher skilled teams. You can however make it more competitive by adding a handicap system to your event.

Here’s a couple of ways you can incorporate golf handicap system into your tournament.

How to Calculate Golf Handicap

This works well for charity golf tournaments as you’re able to calculate a team handicap after the event has concluded.

The committee secretly selects a par 3, par 5, and four par 4 holes from an 18-hole course. The par-4 holes should include two from the front nine and two from the back nine.

The handicap is determined by calculating the teams strokes over par on the six selected holes, and then multiplying that number by 2.8. This will be the number that is deducted from the gross score. Please note, a maximum of three over par should be used on the par 3 and 4 holes, while a maximum of four over can be used for the par 5 hole.

If you can obtain handicaps from the players prior to the event, the 50 percent method works quite well.

Add all players handicaps together for a given team. Divide the team’s total handicap number by twice the number of players.

Subtract the handicap number from the team’s gross score at the end of the event to determine the team’s net score.